Mutant Frog is the leader of the Mutant Animals created by Dr. Animo. In the beginning of the series Ben 10 you'd seen him as Dr. Animo's favorite pet to ride on. His first apprentice was The Beginning in the hit series "Mutant Animals". And he talks in galayith's voice. Mutant Frog is a common Earth frog, which was mutated by Dr. Animo's Transmodulator in the episode Washington B.C.

It is a large frog with moss green skin, 4 red eyes has 2 horns on the side of its head, and has orange circular spots on his back and legs.

Since it is a frog it is capable of great leaps, and being larger, can jump greater distances. Its language is broader in scope and is more sticky and adherent. In Ultimate Alien, when Big Chill freezes Mutant Frog's feet, Dr.Animo actively encourages it through a device that makes the mutant frog create a warm aura around the frog that makes the ice melt. It also can break free easily from ice and other objects, due to the mass it has as even Four Arms could barely lift him.

Its only apparent weakness is that if its legs are frozen or covered with crystal, it can't move for a while and it's chance to back it up. 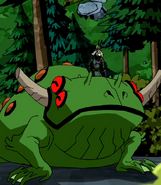 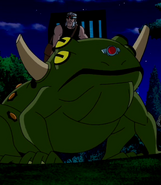 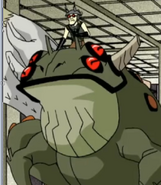 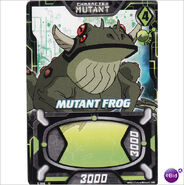 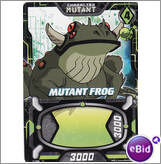