Doctor Aloysius James Animo, later known as the D'Void, is one of Ben Tennyson's enemies, a mad scientist obsessed with genetic experiments on animals. He was first introduced in Washington B.C. and became one of the most recurring villains in the original series, though he had only one appearance in Alien Force. Animo is notable among Ben's enemies for being the first human villain to oppose Ben, as well as one of the few ones in this category to be a regular villain.

Doctor Animo was once a promising researcher in veterinary science. His career was cut short when it was discovered that he was performing twisted genetic experiments on animals. He had hoped that his research would win him the Verties Award, which is an award in veterinary science. Because of the nature of his research, he lost the award to another doctor, named Kelly. This drove him mad and he dropped off the map for five years until he could perfect his research. Because he locked himself indoors for five years, his skin and formerly brown hair turned pale from overwork and lack of exposure to the sun.

[1]Dr. Animo in the original series A few times before his first appearance in the show, Animo watched a TV report showing Ben as Diamondhead saving a camp from a giant robot. This inspired him and led him to look for a way to create his own minion monsters.

Animo eventually appeared in Washington B.C., where he created a device called the Trans-modulator which gave him the ability to mutate animals into twisted giant versions of themselves. He then was able to upgrade it so it could reanimate dead cells, literally bringing dead animals (including a Mammoth and a Tyrannosaurus) back to life (though the Tyrannosaurus had exposed portions of bone and flesh meaning that his reanimated monsters are actually zombies). Using his new army of animals, he intended to kill Kelly and get the award he had lost, but Ben eventually destroyed his Trans-modulator, reversing its effects. Animo was then arrested. [2]Animo without gear He appeared again in the episode Dr. Animo and the Mutant Ray, where he created a much larger version of the Trans-modulator using the broken-off face plate of the Omnitrix and a large telescope in an abandoned astrology lab. This version mutated living creatures with alien DNA, creating odd mixtures of alien and terrestrial creatures, such as a "Heatbat". He had also managed to turn Grandpa Max into a Stinkfly-larve type creature. Before he could complete his plans to use a satellite to shoot the ray all over the world, Ben stopped him with Gwen's help. Since his mutants (with the exception of Grandpa Max) were never shown being cured, it is possible that they are still around. For some reason, his trademark giant frog is also present, though he may have simply re-mutated it sometime after his original defeat. How and when he escaped is unknown though he could have used a similar tactic he used in Divided We Stand.

In Divided We Stand, he escaped what seems to be Alcatraz Island on a mutant seagull (he had trained the seagull to smuggle in parts he could use to build a Trans-modulator then mutated it) and captured one of Ben's Ditto's to access the DNA stored in his Omnitrix. Using this DNA, he created an army of self-replicating Lepidopterran mutants, but they were destroyed and he was captured again. Afterward, Grandpa Max deleted all of his computer files, preventing him from using any more Omnitrix DNA in his experiments if he escaped again.

He also makes a brief appearance at the end of Goodbye and Good Riddance, wearing an ape-like exo-suit, and leading a group of animal mutants towards Ben's school.

Animo briefly appeared at the beginning of Secret of The Omnitrix, where he captured Max and Gwen and created a dangerous bomb. Though he escape, Ben destroyed the bomb, unintentionally causing the Omnitrix's Self-Destruct Mode to be activated.

[3]Dr. Animo in Alien Force Five years later, during the time of Ben 10: Alien Force, Dr. Animo is found in the Null Void (he purposely went in to find new animal species but couldn't get out) where he assumed control over the Null Void Guardians and took on the alias "D'Void". His appearance changes in this series; his body is more muscular and his skin is no longer green. Considering his surprise when he learned that Brainstorm (before he learned it was really Ben), knew his name, it can be assumed that he never went by it while there. He plans to open a wormhole to the real world to use the Guardians to take over the Earth, and he forces the citizens there to gather a mineral that not only powered his drill but gives him immense strength and near invulnerability (to the point where a direct attack on him was completely ineffective). In Voided, his plans are foiled by the joint efforts of Helen, Manny, Ben, Max (code named "The Wrench"), and a group of other Plumbers' kids (including a Havoc Beast and a Vulpimancer).

Animo later returns in Ben 10: Ultimate Alien, having somehow escaped from the Null Void and going by his true name again. [4]Dr. Animo in "It's Not Easy Being Gwen" At the beginning of Escape From Aggregor, he used a device to take control of the Yeti in the Himalayas and create a "De-Evolution Bomb" to turn everyone in the Southern hemisphere into yetis (which Ben, Gwen, Kevin and even the Yeti thought was a stupid idea). Using Brainstorm, Ben was able to turn his mind-controlled Yeti against him, while Kevin and Gwen disabled the bomb. He's then most likely sent back either to the Null Void or a normal jail. He has also returned to his original appearance (for the most part) and voice.

Animo returns in It's Not Easy Being Gwen where he attempts to raise an army of his signatured mutated Frogs using the enhanced version of his telescopic transmodulator. He is eventually defeated by Gwen, Ben and Kevin. After being brought to the authorities Animo was released from prison a few months later on good behavior.

Animo comes back in the episode The Eggman Cometh where he has a farm which is where he uses his de-evolution ray to turn normal eggs into Dinosaur eggs that when they hatch, they have creatures similar to Dragons. However, he's defeated and all of the creatures are turned back into normal Chickens thanks to Jury Rigg and Jetray.

Animo has been shown with a new look, just like everyone else; he's got his green skin color back. He's taken a rather Psimon-like form; his brain is exposed in a large dome, with two antena on it. In the present he wears a long green lab coat and keeps his eyes covered with red goggles. He retains his black finger-less gloves. In the flashbacks, Animo is shown to have his OS look, albiet scrawnier than before.

Dr. Animo has apparently developed a hobby of cutting up and stitching together stuffed animals, his cell full of them. From his cell he has been mutating ants and using them to construct a sky-scraper sized base with a transmitter to mutate every ant on earth. Also making a "King Ant" costume armed with flame throwers. Ben and his new partner Rook Blonko come in and fights Animo and his army and is later attacked by Khyber's Pet in the form of Mucilator.

Animo attempts to control the beast but only provokes it into attacking him. Ben gets Animo's ants to attack Mucilator and Rook is able to kill the ants by creating a anti-ant bomb from Animo's equipment. This forces a retreat from the beast and allowing Ben and Rook to return Animo to his cell.

In the episode Evil's Encore, Dr. Animo is shown in a flashback using technobugs to take over the Plumber's HQ at Mount Rushmore. His goal was to spread his mutation ray all over the planet by hijacking the Plumber's network of satellites. However, his scheme is foiled as Ben, Max and Gwen were able to destroy his bugs and send him to Plumber Prison. Five years later, he again attempts to use a technobug to escape and mutate the world, but his plan is thwarted before it even got started as Blukic eats the technobug as a snack.

[6]Animo giving Argost his mask In T.G.I.S., he had somehow managed to escape Plumber Prison and had revived V.V. Argost with a mixture of cryptids as a new body. Apparently, the process had taken 3 years, the delay being attributed to fighting Ben Tennyson and his time spent in jail. He later decided to capture Fiskerton, to research him and add him to his collection, but he and Argost ended up defeated by Ben, Rook and The Saturdays. He was last seen running off after his control over the Chupacabras was destroyed.

Animo appears in Ben 10: Protector of Earth as the main villain of the South East. He battles in a robotic gorilla suit, similar to the gorilla body he has in Ben 10,000. He kidnaps Gwen, hoping to use her as his experiment to test animal mutations. After Ben defeats Clancy, Animo's agent, he learns Animo and Gwen are at the Oil Refinery. When at the Oil Refinery, it is revealed that Animo has tied Gwen up to lure Ben into a trap for revenge. Ben fights Animo and defeats him, then he saves Gwen. He uses DNA from Wildmutt, Stinkfly and Diamondhead combined with the local wild life to create enemies for the level. He uses Stinkfly DNA with snake to create the Snakefly and Snakefly Striker. He uses Diamondhead DNA with bears to create Crystal Claws. He uses Wildmutt DNA with cat to create Feraline and Feraline Pouncer.

Animo appears in Vilgax Attacks in the Null Void. Here he's still using his D'Void alias. His power source consist of numeral capsules of cormite fire. In order to harm him, you need to freeze them using Big Chill's frost breath. He also summons a Null Guardians and uses it to attack.

Animo appears in Omniverse as a major antagonist of the past sections, creating giant mutant ants and spiders as most of the enemies faced in the past. Ben and Rook first fight one of Animo's Mutant Ant Queens as part of a training exercise in the Present. A second Queen ant is guarding a captive Grandpa Max in a steel mill in the past which Ben and Rook also has to defeat.

Also a giant spider called the Arachnidroid is rampaging through a construction site that past Ben and Rook have to plant explosives in for the present. Finally in order to lure Malware into a trap Ben and Rook break into Animo's base and steal one of his mutant rays to serve as bait at which point the pair has to confront Animo himself and is defeated by draining power to his hover platform. 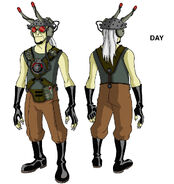